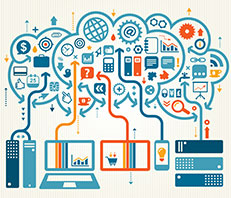 lanet Automation is the software framework of Proietti for the development of applications oriented to the Internet of Things.

Planet Automation implements the Hardware Abstraction Layer (HAL) pattern by means a devices model representation completely decoupled from the underlying hardware. This allows you to develop hardware-independent client applications: if you change your hardware, you don't have to change your software, thus preserving the investment in software development. The HAL of Planet Automation has a modular and scalable architecture able to integrate and shape new devices, or deploy new services as and when there is demand.

Integration and interoperability between incompatible hardware. Planet Automation enables interoperability between not compatible hardware (e.g. due to different communication technologies) and to establish relationships of cause and effect. It is possible to program the rules according to which an event generated by a device can trigger a command on another device which use a different technology.

Provides the ability to define rules to control devices behavior on the basis of events and system states. For example, "Turn on the heating when I'm coming home" (use the mobile phone's position) or "Turn off lights if there is nobody at home" (using presence sensors).

Planet Automation can integrate external software services and manage them as if they were devices. For example, you can integrate Facebook or Twitter and send or receive status updates to or from the home automation system. E.g. your thermostat may post this: "At home it's very cold, do you want to turn on the heating?". Other example: you can use an internet weather service to set the best temperature at home.

You can associate passive devices to home automation smart devices, in order to obtain a transparent and user-friendly management of the dumb device. For example, you can connect a regular lamp to an automation device equipped with actuators and sensors and expose this set as if it were a single object with its smart features (i.e a smart object).

INTEROPERABILITY, FLEXIBILITY AND EFFICIENCY OF COMUNICATION

When designing Planet Automation we put a great effort in communication with system clients. Planet Automation has many communication interfaces, optimized and multi-platform. The clients of Planet Automation can operate on the same computer as the server (in memory inter-process communication), on a computer on the same LAN (via TCP) or, in a transparent way, on a remote machine accessible over the Internet (via HTTP/WebSockets). In any case, you can select the most appropriate communication channel simply by configuring the client. In addition, the availability of communications technologies such as the WebService (SOAP e RESTful) and WebSocket ensures maximum interoperability with client on any platform (Windows, Java, Android, iOS, etc.). To start communicate with Planet Automation you just need of an updated web-browser!

They are the programming interfaces of Planet Automation: allow developers the full control of the system. Again, you have a wide choice: there are APIs available for synchronous communication (the classic request-response pattern) and for asynchronous communication (according to the publisher-subscriber pattern) with data pushed to the client as soon as they are updated. Developers can choose to use either one or the other mode or even both at the same time from the same client. The asynchronous mode provides an efficient event-driven communication: as soon as something happens, the system will notify you with updated data The data messaging between client and server use the Planet Automation Protocol. It is a simple and human-readable protocol, based on XML and also available in JSON format.

Devices can be hot plugged to Planet Automation without stop the system. It is not necessary to stop or reset the service so that new devices will integrate and start working.